Study of costs and performances between Steel Abrasive and Sandblasting 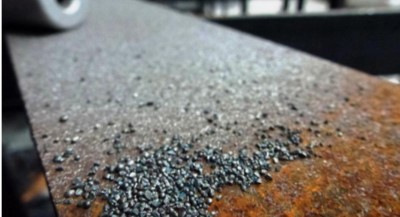 Study of costs and performances between Steel Abrasive and Sand

In this note the usage between steel abrasive and sand is compared in indoor places as blast rooms, tanks or ship holds, using blast cleaning equipment by compressed air.

Modern systems of projection of particles by compressed air, sandblasting or blast cleaning equipment, work interchangeably with any type of abrasive. This allows to select the suitable abrasive for each type of work using the same equipment.

In this note there is no reference to equipment that uses mechanic turbines for the impulsion of abrasives, because they can not use sand.

It is the natural abrasive of highest availability and very low cost.  It is historically “the abrasive”, and gives the name to all processes of preparation of surface by projection of particles, commonly called “sandblasting”.

The type of sand that is used, is silica not calcareous, because it has the necessary hardness for this type of work. As it is a natural abrasive it must be subjected to analysis, due to the pollutants that it can have from its place of origin, dunes, rivers, quarries, etc.

To work properly with the sand, it should not be used in bulk and must be sifted, removing the fine, which does not perform a good sandblasting on the surface and the thick that would seal off the equipment. It should also be subjected to a drying process due to its capacity to absorb humidity.

It is extremely fragile and projected by high production equipment; it can only be used once because more than 80% is transformed into dust after the first impact. It creates great pollution in the working environment by the fragility of its particles that, after the impact, become dust in a high percentage, with sizes below 300 Mesh.

Due to its composition, as it divides finely releasing silica, it causes an irreversible illness called Silicosis. Because of this the safety requirements must be really strict, nevertheless the use of sand as an abrasive has been banned in most of the technologically advanced countries.

It is an abrasive that is obtained from steel through a fusion process with controlled chemical composition. Rounded particles that constitute the steel shot are obtained from the primary process of manufacturing. These particles in the state of largest diameter are split forming the angular steel grit.

For those works where the use of the sand is replaced, grit is exclusively used, in some cases with the addition of a small percentage of shot. A particle of grit has edges and nibs and as it is projected, works as a tool that fixes and drags on the surface to process.

This abrasive can be selected according to the work to be performed, not only by the size of the particle, uniform in all of them, but also be the hardness in certain range. It is highly recyclable, being able to be projected from 700 to 5000 times according to the diameter, type and hardness of the abrasive used. As they are particles of tempered and low tempered steel, they do not cause any problem of pollution in the surface to be treated.

The dust produced in the operation is just basically the result of the materials removed from the surface to be treated. Because it does not absorb humidity, steel shot does not require a previous drying and as all the particles are of similar size, they performed a totally uniform work.

In the following table, you can see the main characteristics of both abrasives:

With these elements you can perform the following economic study

As an example, we will suppose that the same work is performed with sand or steel abrasive.

In the 3 examples the same blast cleaning equipment is used with similar consumption of compressed air.

(1) The consumption of abrasive is average. The same may vary according to the quality, hardness, impact speed, etc.

(2)  The average cost of the abrasive is estimated and varies according to the different suppliers.

Knowing the different characteristics of sand and steel grit abrasive, we can see how each abrasive, working in enclosed places behaves:

Operative cost of the abrasives (3)

Similar projection equipment and protection of the operator are used. However the sand is more abrasive and causes a higher wear of the line of transport of abrasive, hoses, couplings and nozzles.

The sand causes more pollution with regard to the use of grit, requiring removal and filtering systems between 3 to 5 times larger than the required for the metallic abrasive. The extraction and filtering equipment constitute the most expensive part in the installation and in addition it increases the cost of maintenance of the filtering elements.

If steel abrasive is used, it is necessary to have a recovery and cleaning system for the abrasive, ready to be used efficiently again. For the sand a collection and disposal system is required.

The use of steel abrasive in enclosed places, is extremely advantageous with regard to the sand, emphasizing the following points:

For more information please contact info@cym.com.ar or phone +54 341 4901100, and our engineering or sales departments will advise you on everything related to equipment, processes, finishes, production and automation of blasting equipment. 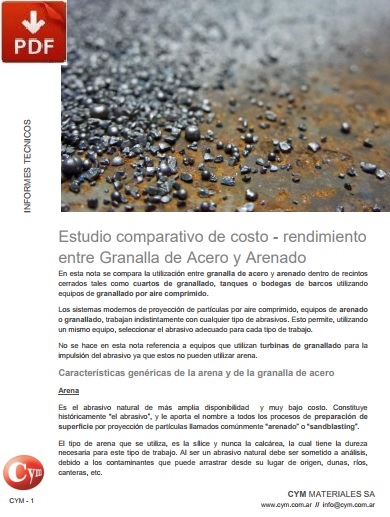